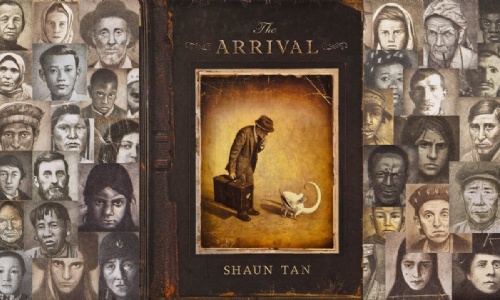 It's Book Week and Year 5/6 are studying Shaun Tan's incredible wordless graphic novel "The Arrival" which tells the moving story of a refugee who escapes to a strange and unfamiliar land.

First we wrote about the contents of the Traveller's suitcase, using our imaginations to describe some unusual objects.  Read this extract from Chloe's poetic and moving description:

On the right side of the case, lies a precious, porcelain teacup, designed with true delicacy and passion.  On the front of the cup, there is a hand-painted flower, there is also a small rose inside.  Perhaps that flower was the symbol of the town he used to live in; maybe it was his favourite flower.  Or maybe he thought he would never see it again.

Beside the small bible, I noticed a ragged, worn, well-loved toy.  It looks as if it had been cared for very well: arms torn off, face rubbed off, it also has chewed legs.  This may have belonged to the traveller's child; maybe this is his lucky charm, his hope that he and his child will re-unite again.

Here is an extract from Laura's beautiful work:

The dark brown suitcase, which was made out of ancient leather, lay alone on the platform.  Lying on top of the heap of treasured objects, a large brown tie, which had a chequered pattern, curled up on the pile like a snail in its shell.  Like a precious parcel, a tied up, handmade wooden box with aged photos of babies and children lay in the suitcase as if waiting to be found.  Enclosed inside a dark blue bag, foreign coins clattered around - who could have abandoned such money?

Next we studied Shaun Tan's style of illustration, his cityscapes and his strange creatures.  Here you will see how his work inspired us: